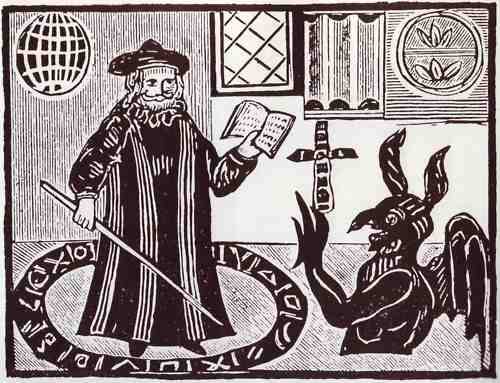 ▲ Detail from the cover of a 1620 printing of Marlowe’s Doctor Faustus.

–Why do they always come at dawn? Finucane wondered aloud, rubbing sleep from his eyes and opening the telegram.

He yawned and scratched his ass. Every mission was confidential. There was something off with the op spec, but he couldn’t afford not to take it. Six months since he’d had work, this fallen wunderkind. His doctoral dissertation on Psychoprojective Metaphysics was heralded as a masterpiece despite its heretical flavor. They said he’d be the greatest since Auerbach.

The bleak office greeted him with customary sterility, Karpov’s gray Nixonian face unchanged, his jowls shaking as he asked:

–Can you do it, Finucane?

Two days later the operating theatre was prepped. Charts–nautical, natal, sidereal–were arrayed on the walls. Finucane had judged the route, plotted precise bearings. Once the technicians had secured his Transcranial Magnetic Stimulation helmet and applied the smooth hypodermic glissando, he closed the magic circle he had inscribed round his gurney and reclined.

Finucane went deep dream diving, memories leading him back through staticky channels as he swam the prescribed path. Gliding through grime and beauty he came to rest outside an igloo beside a stone tree.

He nodded and crawled into the igloo, his technicolor stigmata leaving trails in the snow. A warmth and mooney tenderness came over him. The technicians saw this on the monitors and adjusted his IV mix: limenamol, strychnine and resolutalamine.

The walls tightened as he crawled, shifting to heart red, blood throb hotness. Constriction. Pressure. His ears were full, his eyes empty and his mouth inundated with metallic exhaustion. Finucane wriggled on, worm-like, until he reached the origin of the world.

The universe collapsed to a still silent point, then exploded into cold bright light with a crashing crack. Pain, tears, regret welled up inside him.

His cry came too late. The technicians covered his face and began turning off equipment as the doctor handed him to his new mother.