It’s everywhere on the Internet right now—NFT this, Rarible that. Tokens, tokens, come get your tokens!

We’ve got people shouting that the whole idea is an absurdity or an abomination, others saying it’s only a cynical cash grab, or that it is yet another harbinger of ecological disaster. As usual on the Internet, there has been way more heat than light, so I’m writing this to place NFTs within the context of art history and maybe help us talk about the whole thing.

First, I’d like to show how much collecting NFTs is like what art collectors have been doing for the last century. After that, I’ll try to outline how they differ and what those differences might mean for culture more generally.

Traditional material arts—painting and sculpture, for example—produce one-of-a-kind physical artifacts. Collecting art under these circumstances is straightforward: there’s only one of any given object, and if someone wants to own it they can buy it.

After the invention of photography, artists and collectors had to come to terms with the fact that an artist can produce an unlimited number of identical prints of any photograph. The art world’s practical answer to the question of authenticity, and thus collectibility, in the era of mechanical reproduction was signed editions.

For example, a good quality print of an Ansel Adams landscape can be purchased for around $20, while a signed and numbered print of the same scene sells for as much as $720,000 at auction.

▲ What differs between commodity print and signed original.

What makes the signed edition valuable is, quite simply, the artist’s signature. When a collector paid nearly three quarters of a million dollars for that signed original, all but $20 of the purchase price was the cost of owning Ansel Adam’s signature in that particular context.

If the idea of an artist’s signature itself being extremely valuable seems surprising or unlikely, consider the enormous prices that collectors pay for celebrity autographs.

The most expensive autograph ever sold as of the writing of this essay is John Lennon’s signature on a copy of Double Fantasy that he signed the day he died. It fetched $900,000 at auction in 2010.

▲ The top selling autograph of all time.

Of course, the collector could have purchased the album on vinyl for $20, just as we can buy an Ansel Adams print for $20. Once again, all but $20 of the price of the object is in the signature of the artist rather than the experience afforded by possession of the artifact.

Photographic prints can be reproduced in unlimited quantities, but artists’ signatures cannot. This led to a situation where the market for art split in two, one fork for collectors and one for those only interested in the work as an experience. I would argue that this is good for everyone. Artists gained a way to sell work that would otherwise be reduced to a commodity, collectors gained access to a new and culturally vital art form, and great works of art became available to everyone at very close to the marginal cost of reproduction.

Digital art takes this unbundling of artistic experience from physical object a step further. Because these artifacts can be reproduced and distributed at essentially no cost, they can be enjoyed in perfect fidelity by anyone with an Internet connection free of charge.

Despite many attempts over the years, the artists who produce these virtual goods have historically had no native mechanism to sell their work, which has rendered it inaccessible to collectors and prevented artists from receiving financial rewards in proportion to their cultural impact.

When viewed in this light, the nature of NFTs becomes quite clear. An NFT is a mechanism by which an artist can publicly attach their cryptographic signature to a digital work of art. In other words, it is a technology that supports in the context of digital arts the same kinds of signed editions that have existed in fine art photography for most of a century. 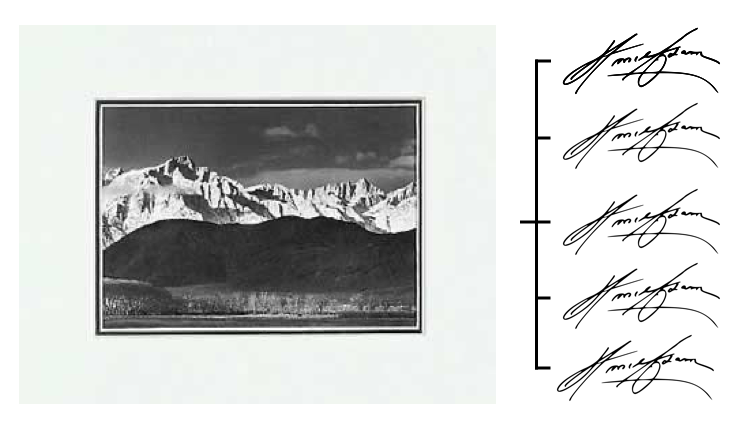 ▲ Ansel Adams mints an NFT in an edition of five.

The implications of this for some common objections to NFTs should already be clear.

NFTs do not create "artificial scarcity”, but are rather a response to the “artificial abundance” of the Internet. The work remains free to the world while only the artist’s signature remains scarce. And, just as with art prints, it is only the artist’s promise not to mint more copies of a certain work that protects a buyer’s investment.

When we hear someone say something like “why would I buy it when I could just screenshot the PNG?”, the questioner has misidentified what, exactly, is for sale. An NFT does not represent the PNG, but rather the signature of the artist in the context of that PNG.

So far, I’ve talked about the ways in which NFTs are mechanically similar to traditional signed editions. Let’s look at ways in which they are potentially culturally different.

The value of any object is socially constructed. In the case of art, the question of value is answered by auctions conducted within the fine art market. This industry has a turnover of around $65 billion dollars/year that mostly benefits a tiny sliver of market participants—around 0.03% receive 41% of the profits.

The top performers are so homogeneous that NYC’s galleries show more art by people who went to Yale than by all minorities combined. In addition to inequalities along race, class, and gender lines for those born in the rich world, artists born in countries without elite institutions are essentially barred from success.

We might well ask what service the gatekeepers who operate these markets provide to make up for these shortcomings. One argument is that they have the taste and education to allocate capital wisely, thus rewarding the highest quality art.

In that spirit, it has been suggested that Chris Torres receiving $600k for Nyan Cat is a travesty, the sort of mistake that traditional markets would never make. I can only point out that the greatest sum ever paid for a work made by a living artist went to Jeff Koons for a metal balloon rabbit. This anti-digital snobbery is an example of the members of the old guard living in denial about the Internet’s role as the primary driver of global culture.

If we can evict the out of touch, exclusionary incumbents who run these markets, it would be a positive change for culture. My hope is that a new generation of Internet-native critics and collectors will arise to replace them, giving us a more inclusive global discourse.

What could go wrong?

The greatest danger for artists is that these new tools will be used to construct online markets as bad as traditional ones, with the only difference being which extended social networks provide access to opportunity.

It’s probably unavoidable that—as in other large, self-reinforcing, reputation-based markets—we will see a long-tail distribution with extreme outliers getting very rich while most digital artists sell relatively poorly. However, unlike the current system, it’s likely that there will be many scenes gathered around different markets, following different social norms. Already, we can see the stark difference between venture-backed money mills and small, grass roots, open source efforts.

For collectors who hope that NFTs represent some sort of investment, there’s the obvious risk that whatever we’re doing today will become obsolete in the near future. No one should bet more than they can lose, and I would no more suggest someone put their savings in NFTs than in Beanie Babies.

On the other hand, I can definitely think of more terrible uses for money given the worst possible outcome is to have financially supported an artist whose work you admire. 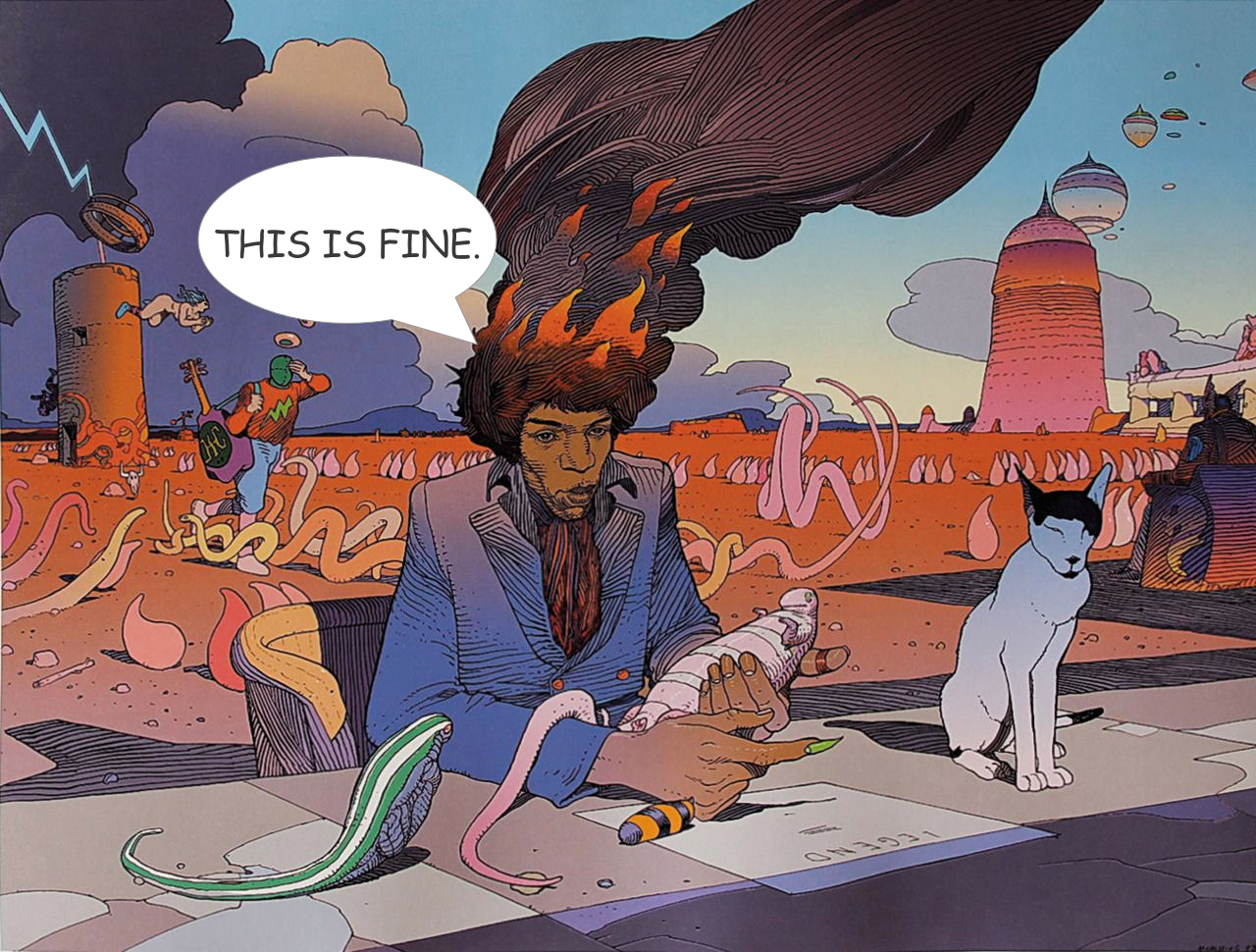 ▲ The author listening to Bitcoin enthusiasts, by Moebius.

And, of course, the greatest danger for the planet is that these systems will be run on needlessly wasteful technologies. A number of high-profile artists, like Memo Akten and Joanie Lemercier, have put considerable effort into outlining the eye-watering energy use of the Ethereum blockchain that is most often used for NFTs. Counter-arguments by cryptocurrency enthusiasts have mostly involved extremely dubious rhetoric about why this is fine.

Most big sales currently happen on markets built using unfortunate foundations, so it’s quite important that we get to work building the future in a more sustainable way.

One artist-led reaction to the NFT movement, initiated by Mario Klingemann, is the use of a new platform called hic et nunc (Latin for “here and now”) that was created by a Brazilian hacker named Rafael Lima.

Minting an NFT on hic et nunc uses around as much electricity as running my tea kettle for half a second. There are Tezos transaction “bakers” running on solar-powered Raspberry Pis in Africa.

Another thing that’s different about hic et nunc is that it’s an open source project that receives a constant stream of improvements from the community of artists who have adopted it. For example, Mr doob—creator of Three.js, the most popular browser-based 3D graphics library—recently contributed support for 3D models on the platform.

Shortly afterwards, French artist Lionel Radisson proposed adding support for SVGs containing Javascript so we could post entire generative systems instead of screen captures or video recordings, which gets much closer to what I regard as the true heart of generative art. Within hours of that, Mr doob had posted the first in-browser, playable video game NFT to hic et nunc. It costs around $12 to collect it, but anyone can play for free.

These kinds of innovations are possible because this playground is being constructed in real time by a community of digital native artists for their own enjoyment. It’s extremely unfair to paint it with the same brush as the engines of monetary extraction venture capitalists have funded in this space.

Given what’s at stake, it’s the responsibility of every artist who would like to experiment with NFTs to seek out lower carbon alternatives, and to bring collectors with them to those platforms.

In my case, I’ve been contributing art and technology to the Internet for decades, and—barring ecological collapse—will continue to do so until I die. For the first time, starting two weeks ago, you can support and collect my work on hic et nunc.