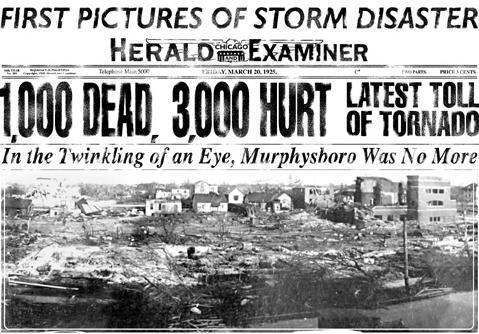 Joe Dunphy, reporting for the Chicago Herald Examiner, covered the great tornado of 1925. It had followed the path of a slight ridge for over two hundred miles, destroying everything over which it passed and killing what seemed like at least a thousand persons. After gathering what he could by telephone, he took a train out to West Frankfurt, Illinois, to talk to a group of survivors:

Well, sir, we were down in the coal mine as usual, just having a regular day of it, when all a’sudden the lights went out. We’d never had a power outage before, so we knew something must be wrong with the generators topside. The emergency candles gave us enough light to climb up the escape shaft, but we couldn’t tell at first where we were. See, the whole town was just… gone. Yes, sir—gone. Tornado took it.

It was nearly eleven o’clock that night by the time Joe got back to Chicago, filed his story, took the elevated home and found out the tornado had been there too, only it had left a note on the dining room table with an address to which child support was to be sent.