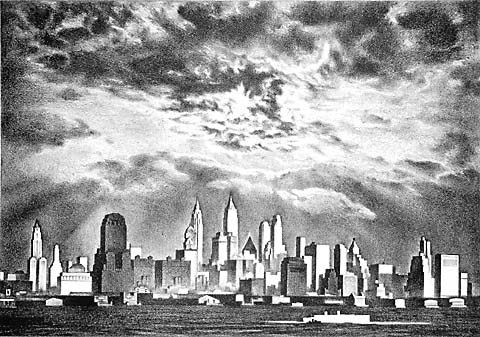 Somewhere deep inside a dream the thing made itself from sky, so vast and formless that the burden of form itself was a struggle.

Whispering solaces and endearments outward from the high lonely mysteries of its roost, the thing regarded a crowd of clouds each holding its skirt demurely and carrying all that the sea had exhaled: a cloud of vapour, a cloud of wonder, a cloud in the shape of an elephant, a cloud of unknowing, a cloud which provided solace, a cloud falling to pieces, a cloud of fine books, a cloud of tall maples growing along broad avenues, each one a city unto itself with unbroken pearly skies receding into the brightness of noon.

Beneath and below, among sullen banks of ice on a firelit island beyond the outer gloom, walked those who had forgotten the island in the air. They served cruel masters who demanded they remain ever vigilant, like servants living in a tree on fire:

They said something about everything while saying nothing at all, never stopping to notice the clouds or the sun, nor even the black machines that had cut them off from the sky like a steel shutter.