Pierre Proudhon is largely remembered for the phrase “property is theft,” which—given that he also said “property is freedom” and “property is impossible”—both over-simplifies and somewhat misrepresents his position. It turns out that the property he called theft was real estate, which he considered to be a different class of property from that produced through labor (an idea that dates back at least to Adam Smith, who was no fan of landlords himself). 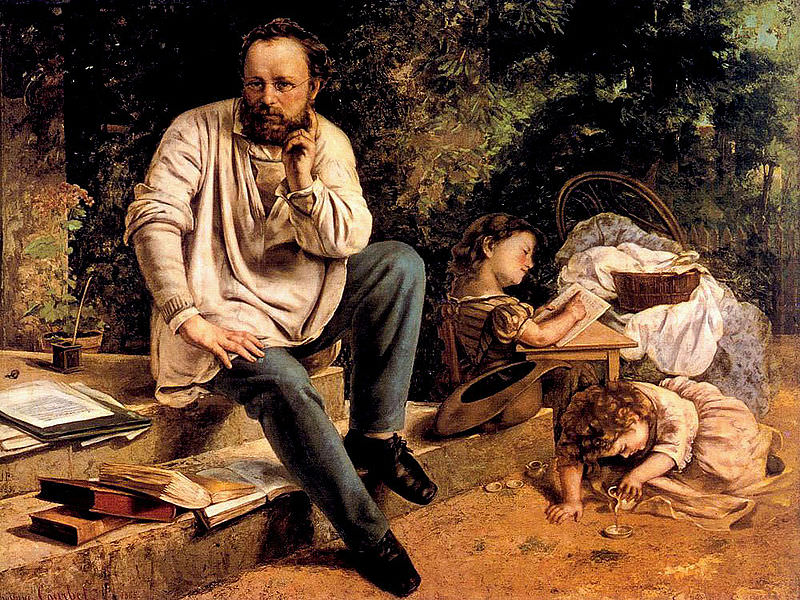 ▲ Proudhon and his children, Gustave Courbet, 1865

Proudhon met Karl Marx in Paris while Marx was exiled there. They became friends, influenced each other, and even though they disagreed on collective ownership and private property, Marx invited Proudhon to join Engels and himself. Proudhon responded with a letter of remarkable foresight and humanism:

a priori dogmatisms, do not let us in our turn dream of indoctrinating the people... I applaud with all my heart your thought of inviting all shades of opinion; let us carry on a good and loyal polemic, let us give the world the example of an informed and farsighted tolerance, but let us not—simply because we are at the head of a movement—make ourselves into the leaders of a new intolerance, let us not pose as the apostles of a new religion, even if it be the religion of logic, the religion of reason. Let us gather together and encourage all dissent, let us outlaw all exclusiveness, all mysticism, let us never regard a question as exhausted, and when we have used one last argument, let us if necessary begin again—with eloquence and irony. On these conditions, I will gladly enter into your association. Otherwise, no!”

I find this quotation so fetching that I felt the need to republish it here as a finely expressed example of my position on philosophical inquiry.

Marx was less impressed. He reacted to this heresy in exactly the way anyone familiar with Marx would expect: he published a savage (and somewhat intellectually dishonest) rejoinder to Proudhon’s The Philosophy of Poverty called The Poverty of Philosophy and never spoke to Proudhon again.