The human mind is in many ways an organ specialized to render the continuous discrete, which is to say that we automatically sort large groups of things into a smaller number of more general categories. All of our perceptions are drawn from one or another continuum, but rather than say, “that plant reflects light at an average wavelength of 523 nanometers, while the other one does so at 524 nanometers,” we just say, “the plants are green.”

We are born able to distinguish every noise a mouth can make, but we quickly learn to consolidate groups of similar mouth-sounds into discrete buckets, usually losing the ability to differentiate between similar phonemes that we don’t hear during infancy. The difficulty anglophones experience with the tone system in Mandarin Chinese and the difference between tu and tous in French are examples.

This perceptual chunking mechanism is used when we make all kinds of generalizations, and we tend to build hierarchical structures for more or less everything—as in the above case of chunking the wavelengths of light between 500 and 600 nanometers into a single taxon labeled green and then building out a set of taxa for the various shades of green beneath it—moss, heather, snot.

Generalizations and hierarchies serve us well, even though most us know that none of them can be absolutely true in every case. In fact, if our brains were less good at reaching snap judgments based on limited information, we’d be doomed—starving rather than eating plants that resemble other edible plants we’ve seen before or being eaten rather than running from a novel predator that looks scary. Experimental evidence even suggests that we recognize things from the general to the specific so that when frightened by a bear, we’re scared before our cognitive apparatus passes the taxon for “big carnivore,” that is: before we’ve realized that it’s specifically a bear.

The price we pay for these speedy bursts of cognitive virtuosity is a feeling of subjective certainty in the face of objective ambiguity. The following figure (taken from the truly excellent Maps of Bounded Rationality: A Perspective on Intuitive Judgment and Choice, a Nobel lecture delivered by Daniel Kahneman in 2002) is one of my favorite examples of this phenomenon. 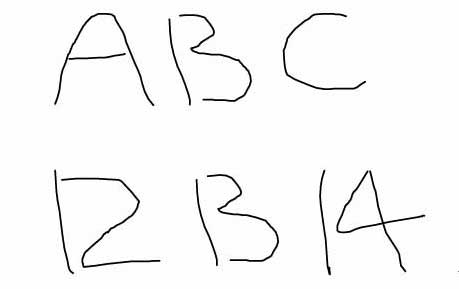 Most readers see the middle glyph on the top row as a B and then see the same glyph on the bottom row as the number 13. The brain uses the surrounding context, including the cultural context required to read the Roman alphabet and Arabic numerals, to convert the continuous curves on the screen into discrete glyphs in the reader’s mind.

The middle glyph itself represents no objective sign, and the context used to determine its identity is mind-local. Most intractable arguments I’ve witnessed have been variations on whether the middle character is always B or always 13, when neither can be true. It is not a far walk from this simple example to a clearer understanding of effects like selection bias.

These cognitive failures are also visible within larger scale human endeavours. A good example is the taxonomy of species. It’s enormously useful, but it is a flattened (rounded to an arbitrary precision?) temporal snapshot of the actual situation, which is that a species holotype is more or less the average of the genetic diversity of a population of closely related organisms at a particular moment in time. We make this generalization because it would be impossibly unwieldy to talk about them at a finer granularity, and because at our subjective time-scale it’s true enough.

The Icelandic band Sigur Rós makes soaring, majestic music that stands somewhat alone in terms of genre. One of their songs, Untitled #1 (Vaka) from the 2002 record (), is among the most heartbreaking pieces of music I’ve heard. Here’s the video:

I hear him singing:

Abstract. A bit melancholy. Completely wrong. The entire album was recorded in a gibberish language that the band calls Vonlenska (the usual English translation is “Hopelandic”). Many singers use nonsense syllables while composing vocal melodies—the French call this “singing the yoghurt”—but Sigur Rós often leave it at that, opting not to create lyrics at all.

I hear English when I listen to Vonlenska because my brain has been carefully calibrated over many years to match clusters of phonemes to words in that language. Speakers of other languages that share a similar syllabary will probably also hear familiar words in this music, which is another demonstratation that we see and hear meaningful patterns everywhere, even when they’re intentionally absent.

Our neural hardware develops more detailed sub-hierarchies within our areas of expertise.

Oil painters carry many more color words for subtle differences of shade than others do. Likewise, Anglophones are quick to recognize the differences between regional dialects of English, but mostly consider other languages to be monolithic.

The first time I truly understood this was when, during a slow overland passage from Northern to Southern Europe, I was surprised (and then felt foolish for being surprised) to learn that French is not a single language, but a continuous distribution of Frankish romance languages that grow more and more like Catalan as one approaches the Eastern Pyrenees.

Likewise, after I’d spent enough time in Barcelona to learn rudimentary Catalan, I found that I could speak it (or something very like it) with most people born and bred on the northern rim of the Mediterranean, even though the languages in each of these other places had different names. This is because these languages are the collective linguistic residue of the original lingua franca that developed at a time when the sea made Catalonia, Provence, the Balearic Islands, Sardinia, and Liguria closer to each other than they were to inland centers of power.

The taxonomy of language mirrors the taxonomy of species in stopping short of final granularity. The personal patois I share with my girlfriend is a largely incomprehensible pastiche of languages and references unique to us. Likewise, but each with a slightly larger reach, the in-jokes and vocabulary that I share with my scientific colleagues, martial arts training partners, or fellow jazz musicians.

Listen to the song again to hear a compressed epiphany: “You sat along the fire / You saw the light / You saw.” Maybe.

For a further discussion of the mind and language, see: Steven Pinker’s The Language Instinct, anything by Daniel Kahneman, Dan Gilbert’s Stumbling on Happiness, Consciousness Explained by Daniel Dennett, George Lakoff’s Women, Fire and Dangerous Things, and the various research papers cited in the bibliographies of those books.

This entry is part of Jack Rusher’s archive, originally published September 22nd, 2006, in New York. It was inspired by a question asked by the Nonist.