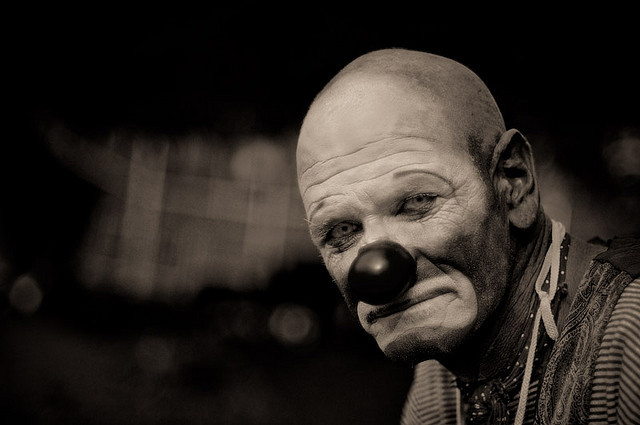 Pierrot’s sadness was a property of the universe, incontestable and eternal. As he walked toward the tree to which he always returned–his tree–terrible desiccated winds blew in from the north, drying his eyes.

When he reached the tree he removed his shoes quietly, pursed his lips, nodded. His small body bent with years, he nodded again and rummaged through his pockets and his mind, finally producing a skein of subtle and lovely silken threads.

Into the tree’s branches he wove his threads until it was covered with something between a spider’s web and a harp. He stepped back, admired his work, stepped forward again. His hands hovered, trembling by the strings for a few seconds before he plucked out a small hollow melody that grew until it resonated like thunder.

The sky shook with his song, opened up and let fall little pleasant splashes of water. Pierrot’s makeup began to melt into fine ripples of colour, his defeated, unlucky conscience lightening as the paint ran down his face.

For the first time in history, Pierrot smiled.