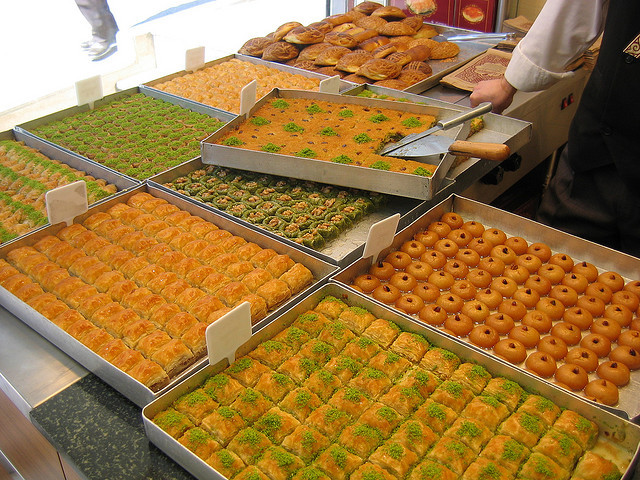 Charlotte was tucked into her bed, blankets up to her elbows, her favorite stuffed animal in her hands, her father seated by the bed.

There was a merchant sailor named Aban who was descended of both men and water djinn. He went from port to port trading goods—the finest silks, exotic spices, pearls and gemstones, dried fruit and nuts, precious metals, Turkish delight—in short, he would carry any and every thing of value. He saw the world one city at a time and made quite a fortune for himself in the process.

One day in the port of Al Basrah, while examining the bill of lading for his cargo, he saw a pair almond eyes looking toward him from the crowd, caught the scent of jasmine in the air, and fell in love all at once, as sometimes happens in storybooks and fairy tales.

The girl whose eyes and perfume had captured him so completely was called Dara. She was the only daughter of the sweetmaker who baked the best, the most perfect, the absolutely nuttiest pistachio and walnut baklava in all of the city. Because she was his only daughter, he had spoiled her with every beautiful robe she had ever wanted, and Aban was sure based on her attire that she was a princess far beyond his reach.

Dara, for her part, had immediately fallen for the dashing sailor, with his tanned skin, purple turban and well groomed goatee, but she guessed that he was too rich to want anything to do with a humble sweetmaker’s daughter.

And so, they went their separate ways, she to her father’s shop, he to the sea.

One year later they saw each other again, for just as brief a moment, at the harbor. It was no accident, either, because Dara had asked after his name and made sure to be walking by the next time he was in port. If anything, they liked each other even more than the first time, but each had the same reservations as before.

Dara went home, later receiving an anonymous gift of Song Orchids, a delicate pink and violet flower that smells of jasmine and sings softly every night at dusk. She placed it in the open window of her room and sighed, wishing that they had come from Aban, which—of course—they had.

It went on like this for some years, Dara rejecting every suitor her father could find and Aban dreaming only of Dara.

One evening, Dara confessed her feelings to the songbirds who came every night to sing with her flowers. The birds flitted about the flowers, listening carefully with their tiny bird heads cocked to one side, the way they do, then flew off into the golden gloaming. The next morning they flew down to the harbor and told all the gulls and pelicans what Dara had told them, after which a pelican who was collecting a bill full of the little fishes who live near the rocks at the sea’s edge told the fishes in his mouth what the songbirds had told him and offered to let them go if they’d promise to give the news to bigger fishes, which they did.

Word reached a passing school of tuna, who carried it on to a pod of whales, some of whom had seen Aban recently. The whales waited outside the harbor in Dilmun where he was moored, then surfaced beneath his ship from each side and carried it at top whale speed to Al Basrah. Aban shouted down to them in the language of the sea that he had learnt from his djinn great-grandfather, asking them what they were doing and why, but the whales kept quiet.

Meanwhile, back in Al Basrah, one of the youngest songbirds fell out of a tree in front of Dara while she was out for a walk, then started hopping around as if it had broken a wing. She gently lifted the bird from the cobbled street and carried it in a fold of her robe down to the harbor to see Doctor Ahmed, who was known for being able to treat any man or beast of the mortal world and maybe some magical creatures and immortals too.

She arrived at the port at the exact moment that Aban’s ship was delivered by the whales, who spun the vessel in circles so quickly that Aban staggered off the deck dizzy and unable to see because his turban had come partially unwrapped and covered his eyes. Dara, at that very moment, was blindfolded by a flock of sparrows and lifted in the air by a pair of enormous pelicans. Before she could say a single word of protest, the birds carried her to Aban and pushed her into his arms, the two of them embracing blindly.

Dara, scandalized at being held so close by a stranger, lost her senses for a moment and shouted, “Unhand me, sir! I am in love with a sailor named Aban, and none other shall have me.”

Aban, though simultaneously flattered and confused by her statement, released her and replied, “Dear lady, you have nothing to fear from me, for I am in love with a princess called Dara.”

Now desperately confused, Dara took off the blindfold the birds had fastened around her head just as Aban pulled the turban from over his eyes.