The most colorful portion of my summer holiday was a kayaking trip down the Dordogne, a wide and meandering river in Southwestern France along which have lived Neanderthals, Cro-Magnon, and the knights of the Hundred Years’ War. The river is still plied by gabarres, traditional river sailing barges that were the primary means of moving freight until the railroad arrived in the late nineteenth century—they now have motors and carry tourists—and barques de pêche, tiny indigenous canoe-like fishing boats that resemble nothing so much as repurposed coffins.

My adventure began at a tiny village called Limoueil, population two hundred, at the confluence of the Vézère and Dordogne rivers, where three generations of a local family operate a canoe and kayak rental kiosk. The middle generation of the family includes a mentally disabled man who mocked me loudly and at length when I mispronounced a local place name. I recommend this experience to anyone wishing to shed excess feelings of self-worth. They agreed to hold my baggage and rent me a kayak and a tent for a multi-day descent starting at Cénac—an unassuming riverside village nestled into a verdant and picturesque landscape—and terminating back at Limoueil. They drove me a few hours upriver to Cénac, where I boarded the kayak with a waterproof container in which I placed my camera, a book on the history of the region and a big bag of dried fruit and nuts. I also wedged a bottle of water beside my seat. 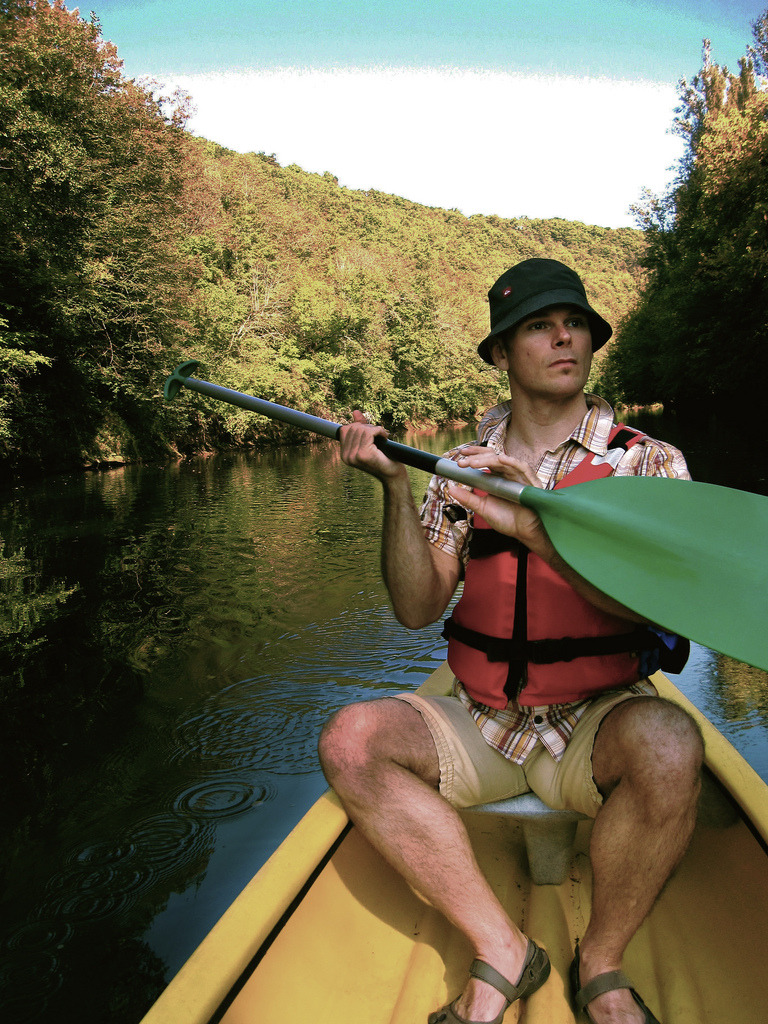 ▲ The author on a subsequent canoe trip on the same river

Large fish were visible beneath the river’s surface, the sun was mild, the sky blue. It was, more or less, exactly as I had hoped it would be. I floated down the river in a state of nature-born idyll until I reached La-Roque-Gageac, where I pulled the kayak onto the opposite river bank and snapped a few photos of the impressive cliff-side castle, church and village, all of which I intended to use to demonstrate the gradual process by which Cro-Magnon troglodytes came to consider themselves mediaeval nobility. This pattern of pristine nature punctuated by cultural artifacts continued as a series of impressive châteaux and chapels followed: Chapelle St-Julien, Château de La Malartrie, Château de Marqueyssac, Château de Lacoste, Château de Castelnaud, and the perfectly preserved mediaeval village of Beynac.

As the day wore on, I grew concerned because I had applied only a thin layer of sun-block before setting out and had not thought to bring more with me. Sometime in the ninth or tenth hour of rowing, all beneath what I now understood to be the relentless sun of Southwestern France, I began to see the magnitude of my error. My shins and forearms, the only parts of me not adequately covered by clothing, were in a grim state. My right shin, in particular, was bright red and already felt burnt. I decided, after consulting a map, that I was around half way to my final destination, that there was a canoeing affiliate a little further down river, and that it would soon be dark. It seemed like a good time to stop for the night.

Pulling the kayak ashore at a riverside pasture full of goats and sheep that featured a small wooden hut with a sign for canoe rental, I spoke with the operator of the local canoe concession. He was a swarthy man of indeterminate middle-age, his left eye an immobile piece of glass permanently focused on the ground to his left. I could smell him, or rather a powerful exudate of cheap beer, before we were close enough to speak. He told me there were no camping spaces for rent, but that I was welcome to pick the place of my choosing among the livestock. I thanked him and trudged off into the gloam to find a relatively merde-free patch of earth amid the bleating. It was at this point that I realized I had not brought my shoes with me aboard the kayak.

The waterproof box containing the tent had already pre-packed when I picked it up. Upon opening it, I discovered several nylon sacks containing inscrutable objects that I knew must be the parts of a tent, but which I had no idea how to assemble. There were no directions in the box and, in any case, it was now too dark to read. A struggle ensued–man versus tent–that went on for over an hour. A truce was ultimately reached, the tent agreeing to a sad semblance of upright posture and the man agreeing not to mention the stench of the well worn plastic bag in which he was to sleep for the night.

Once the tent was assembled it became clear that the box containing the tent did not, as one might have expected, contain anything else: no sleeping bag, no under-pad, nothing more than the tent itself. The uneven, rocky earth of the pasture provided scant comfort and it was stiflingly hot within the tent. I stripped naked, which required little effort because I was only wearing three articles of clothing, hat included. My body developed an adhesive relationship with the bottom of the tent, its plastic underlining and my sweat-coated flesh reaching a level of intimacy I would rather forget. I nestled my head on a small pillow made by forming my clothing into a ball.

The farmer had driven out, a little later than usual, to move the sheep into a fenced-in pasture further from the river. I poked my head out of the tent and exchanged the requisite lengthy French pleasantries with the farmer, careful not to emerge far enough to embarrass either of us, until he went off into the night.

Sleep finally came, shortly after I did, and exhaustion made possible a fitful slumber periodically interrupted by peculiar noises and, most distressingly, two attempts upon the sanctity of my tent by an unidentified medium-sized mammal. In both cases I found myself punching the creature through the lump of tent under which it had crawled and barking at it as if I were a mad dog. The second invasion left me wide awake in the middle of what had become a very cold night. I unbundled my clothes and put them back on, which had almost no effect against the cold.

Shivering and contemplating the absurdity of leaving a very comfortable apartment to swelter and freeze in a mostly collapsed tent situated within a pasture in the middle of nowhere, I heard the first birds of morning begin singing; dawn was coming and with it the sun that had scorched my flesh. I decided to decamp in the dark and begin paddling as early as possible to outrun the sun.

While packing the tent into its waterproof container I tripped into a bramble that bit deeply into my sunburnt right shin, drawing blood. Still shivering, I tossed everything into the kayak and pushed off from the shore, missing my footing in the dark and falling into the black water. I swore bitterly and began paddling as quickly as I could without running into the trees at the water’s edge. The river, up until this point quite placid, grew torrid. I cannot recommend traversing even minor rapids under cover of night; bruising and wetness were the unavoidable result.

Dawn over the valley was beautiful, the clouds shining as if painted over a toxic undercoating of lead oxide. The stretch of river from my campsite to Limoueil was a depopulated twenty kilometers that, while lacking the castles of the upper Dordogne, had ample wildlife: kites, herons, ducks, dragonflies, kingfishers, various large birds of prey, frogs, turtles, and more dragonflies. I attempted to enjoy the loveliness and peace and nature around me, but I could not quite overcome all my pains, and, besides, I needed to outrun my solar nemesis.

After the first hour of morning paddling I felt an uncomfortable sensation in my lower abdomen that, I imagine, is something like the feeling of a live serpent squirming within one’s bowels. I was surprised to learn that eating two kilos of dried fruit and nuts, the better part of which was made up of dried prunes, had resulted in a certain defecatory urgency.

Scanning the shoreline for a break in the trees, hoping to find somewhere to park the kayak, a farm came into view. It was a pretty place constructed of butter-colored stones with a lawn that reached nearly to the river. I had no desire to use the front lawn of this charming house as a commode—what I had was need, pure and undilute. Disembarking from the kayak, I made a mad duck-walking dash for the nearest tree, behind which I hid, hunched down with my shorts around my ankles, as a stream of wholly liquefied diarrhea arced through the cool morning air. I hoped beyond hope not to be found in this position, for even the politest Frenchman was unlikely to forgive the sight of a man leaving a vile puddle in his front garden. Once I was empty, my ammunition depleted, I cast about for something with which to wipe myself, ultimately settling on a dry leaf and a quick rinse in the river before departing, shame-faced and furtive.

At the last village upriver from Limoueil, with only one hour of travel left, I had to admit defeat. My shorts pulled down to cover my shins, my hands grasping the paddle upside down to protect my burnt forearms, and my life-vest draped over my thighs, I was still taking too much sun. The man at the restaurant into which I walked to ask for help was bemused by my plight, but he phoned the kayak kiosk and explained the situation. They sent a truck and some ointment, chauffeured me back to the village and helped me find a comfortable place to stay while recovering from this part of my vacation.