Midday quiet broken only by a church bell ringing in the distance. Ding-dong, ding-dong. Lazy but insistent under the hot sun.

A dog barks once, whines for a moment, barks again.

Down the path from the church a man leads a donkey pulling a cart on which rests a simple unpainted coffin. The cart bounces on the cobbles, the coffin on the cart. Clop-clop, clop-clop. 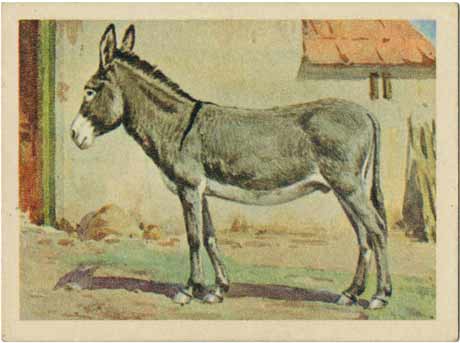 ▲ Donkey from a set of cigarette cards used to teach children their ABCs. c. 1918

Villagers flow from shadow to shadow the way a river meanders along its sunken path.

All along the road twisted trees beg for rain with outstretched branches, still-cursed serpents slither beneath rocks, and Don Fernando rots in a wooden box.

She was seated in their round hut, tending the fire, when her younger brother returned from the hunt carrying a live deer slung across his shoulders.

He cut a chunk of flesh from the flank of the deer with his stone knife, spilling blood on the floor.

He handed her the meat, held still the deer, and poured water over the wound, washing away its blood. The deer was whole.

The next day her man returned from a trading trip to neighboring villages. They told him the tale, but he didn’t believe until he saw the same miracle. The next morning he and her brother set off for the fork of the Great River, the place where the deer had been captured.

After two days of waiting, she followed them to where they lay dead, blood on her man’s axe and her brother’s knife, cormorants eating their eyes. Near the bodies there was a tiny, clear pool of spring water.

She cut a branch of blooming rosemary, dipped it into the water and watched as roots sprouted from the branch.

Using her man’s axe, she dug a pit. When it was wide and deep, she threw his body into the trench, then gently lowered her brother down on top of him. Before covering them with earth, she dipped her right index finger into the gash on her brother’s head, walked to the spring, and let fall a single drop of his blood into the water.

As she was placing the final stones atop the grave Fernando drew breath and cried out for the first time.

Part Three: The First of Many Names

She lifted the water-born boy from the spring’s edge. He was silent and nearly motionless, watching her with calm, dark eyes. She gave him the first of many names: Atzo. Her name was Lilura.

Lilura enlisted the aide of forest spirits to build a dolmen enclosing the spring. She served there as a miracle worker, a witch woman, then a priestess, drinking the waters and using the fountain’s power to heal the sick.

Atzo lived with her, learning the languages and customs of the pilgrims who came to her for help. After fifteen summers he grew tall, strong and restless. The trails of the land drew him away from home, and he wandered for a hundred years before returning. 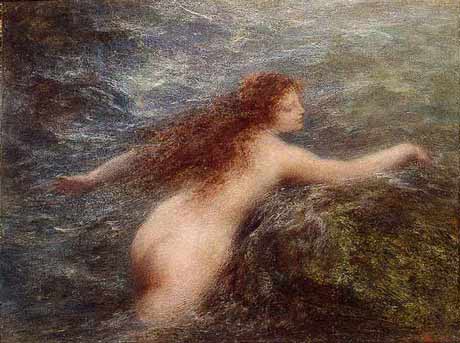 When Atzo came home, Lilura had grown thin and pale. She would take no food, only the sacred water. He watched her grow paler until she was translucent, then nearly invisible, with light passing through her skin, blood, and bones. Tiny fishes swam in her veins.

One night she called for him to come into the temple and hold her. She transformed into water in his arms, her flesh flowing down into the fountain, which dried up before morning.

While Atzo was living for a time with the mountain people, one of the mountain hunters caught a young ibex in his snare. The ibex said, “Life is hard for my tribe. Food is scarce. Almost everything in the land hunts us. We live in constant fear. Could you take pity on me this one time, sir?” 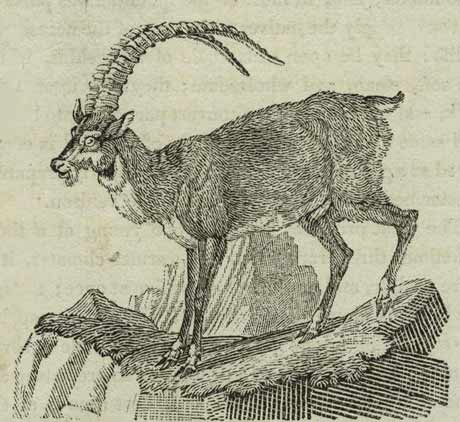 The hunter answered, “No, my family needs meat and skins; you have both.”

The hunter chuckled. “What could you offer me?”

The man, who had tasted his wife’s milk, knelt down and suckled for a moment from the ibex’s teat. Her milk was sweet and good. He carried her back to his stone hut, drove a stake into the ground, and tethered her there.

The ibex was warm and safe near the man’s fire. His wife brought food and water for her each day. The man’s children kept her company. It was the best life she’d ever known.

After the moon had come and gone a few times, some other ibexes snuck up to the hut under cover of night to ask the first ibex what was going on.

The others talked amongst themselves and many of them decided that a little milk was a small price to pay for safety. Their only concern was that the rams of the tribe may not be welcome. In the morning, the hunter and the first ibex worked out a deal: if they promised that they and their descendants would stay forever, they could all come and be fed and protected from grey wolves and golden eagles, even the rams.

With so many ibex, the hunter created an animal corral and became a farmer.

At the beginning of their first spring on the farm, the ibexes were visited by some of their cousins.

The ibexes liked this idea very much. They asked the farmer to let them out for the day, but he said, “We made a deal. You have to stay here.”

Some of the ibexes complained, but others reminded them of the wolves and the eagles. In the end, they agreed that, “A little freedom is a small price to pay for food and safety.”

Later that spring, the farmer took a ram from the corral and carried him off toward the high lookout point where the tribe of men went to dance around a big fire at night. The others asked after him the next day, but all the farmer said was, “He’s gone to a better place.” 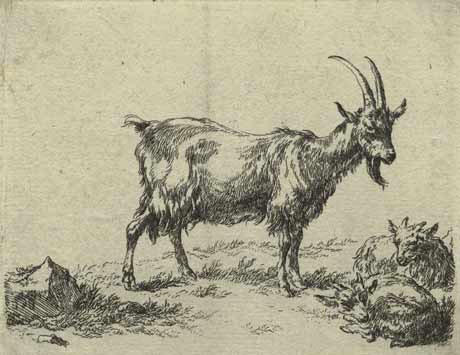 A few summers later, the remaining wild ibexes came to see the tame ones—who had started calling themselves “goats”—at the corral one last time. The goats had changed so much that their wild cousins could hardly recognize or understand them anymore. All the ibexes were able to learn from the goats was that although they lived in constant fear of the farmer, they were safe from wolves and eagles.

When the ibexes were a good distance from the farm, they made a pact: “We must never speak to man again. He is too clever. His words trick us.” The goats never made an oath; they simply grew too afraid to speak.