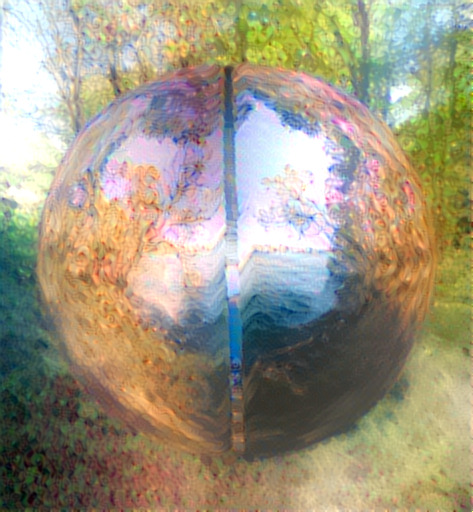 Claude was jolted from deep slumber by a flash of light so bright and white that what leaked around his shutters was enough to illuminate his bedroom like the midday sun.

He stirred himself, donned a pair of boots and an overcoat atop his nightclothes, fetched a candle, and ventured out into the gardens. The smell of ozone and a series of scorch marks in the grass led him to a rotating, undulating sphere hovering by the estate’s small lake. Standing there, listening to its faint humming while admiring the gleam of candlelight reflecting off its smooth surface, he grew determined to paint it as soon as the sun was high enough to give good light.

All day he worked, trying to capture every nuance of what he began to believe was a guest who had arrived from some unimaginable distance. He wondered if it could feel the welcome he beamed toward it with watery eyes.

That night, his painting drying in the studio, he dreamt of communicating with the Sphere, joining hearts with it, melding their cultures until a new golden age emerged.

In the morning he went to his glass house to cut fresh flowers, which he carried down to the lake and strewed about his new friend. It seemed to understand his intentions, thrumming twice and pulsating gently.

For lunch he laid out a picnic on a blanket by the sphere and worked his way through the meal, explaining each step to his guest. It was just as he began the cheese course that it starting humming louder, opened a bit wider, and launched a barbed ovipositor into his chest, implanting hundreds of translucent eggs.