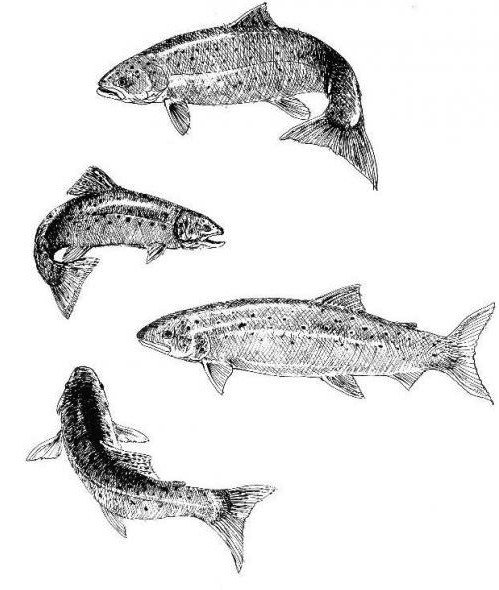 A long time ago in a place whose name I do not care to remember, I lived with my grandmother beside the mouth of a famous river where, after endless slow meanders, it met the sea. We were on a slight rise in the green lowlands surrounding a hillock upon which rested a village, and we were oft visited by salmon.

The salmon in that part of the country weren’t like the kind you’re used to here. No, they swam through the air and liked to sing—musha rin um du rum da—all night long. The villagers would lock everything tight by nightfall, for once it was proper dark they came nosing up from the river, jiggling door handles and peering in windows with their fishy eyes, singing all the while. Unlike most of the villagers, my grandmother was never frightened of them, and she’d always leave a bit of leftover cod or the like out for them on autumn evenings.

Early in the October of my tenth year, during the rainiest season in that rainiest of places, we had a terrible storm. The river, a friend as long we’d known it, changed heart and grew angry and swollen, taller than a windmill and stronger than a giant. Standing at the window of the cottage I saw illuminated by lightning flashes the docks below us disappearing beneath the waves, dinghies washed away in seasick spirals.

We ran outside to make for the village, but our low rise was now a shrinking island severed from the mainland by the rising river. I ran to the shed and dragged back our old wooden ladder, which we climbed to get on the roof of the cottage as the water continued to gain ground.

We could see, when the lightning flashed, the village above us, near enough to make out the houses but farther than the moon. The water was below us now, in the house and climbing. We held one another and waited for the end to come, the stones to give way, the timbers to collapse, and collapse they did. We were swept off the roof into the water, surely lost and gone and drowned and dead beneath those raging waters.

As soon as we were underwater I lost my grip on her hand and the breath of air I had been holding along with it. The inky cold blackness pulled me deeper and deeper, and I knew that it was all over, but it was then, just then, that I heard it—musha rin um du rum da.

The next morning, with the sun shining down on us all, the villagers found me soaked to the skin but unharmed and sound asleep. They said it was a miracle that I’d been able to swim to shore, but I knew the truth of how I’d got there.